Information on the Hill Street Blue's Precinct House in Chicago

Part of the title sequence of Hill Street Blues, shows the Maxwell Street Precinct House. I first became involved with the building in early two thousands when there was news on the internet that it was to be demolished (likes so much else at that time in Chicago). As a long time Hill Street Blues fan I was outraged and joined an internet campaign to save it, publicising it greatly in the UK where I live. In the end we were successful in that common sense prevailed, a use was found for it and an extensive refurbishment undertaken. Then in 2005 I was on Holiday in the USA and a contact in the Chicago Mayor’s office who had also been part of the campaign, suggested I went to see it and so I drove up from Huston (where I was on Holiday), stayed in Chicago for a few days and took this photograph. 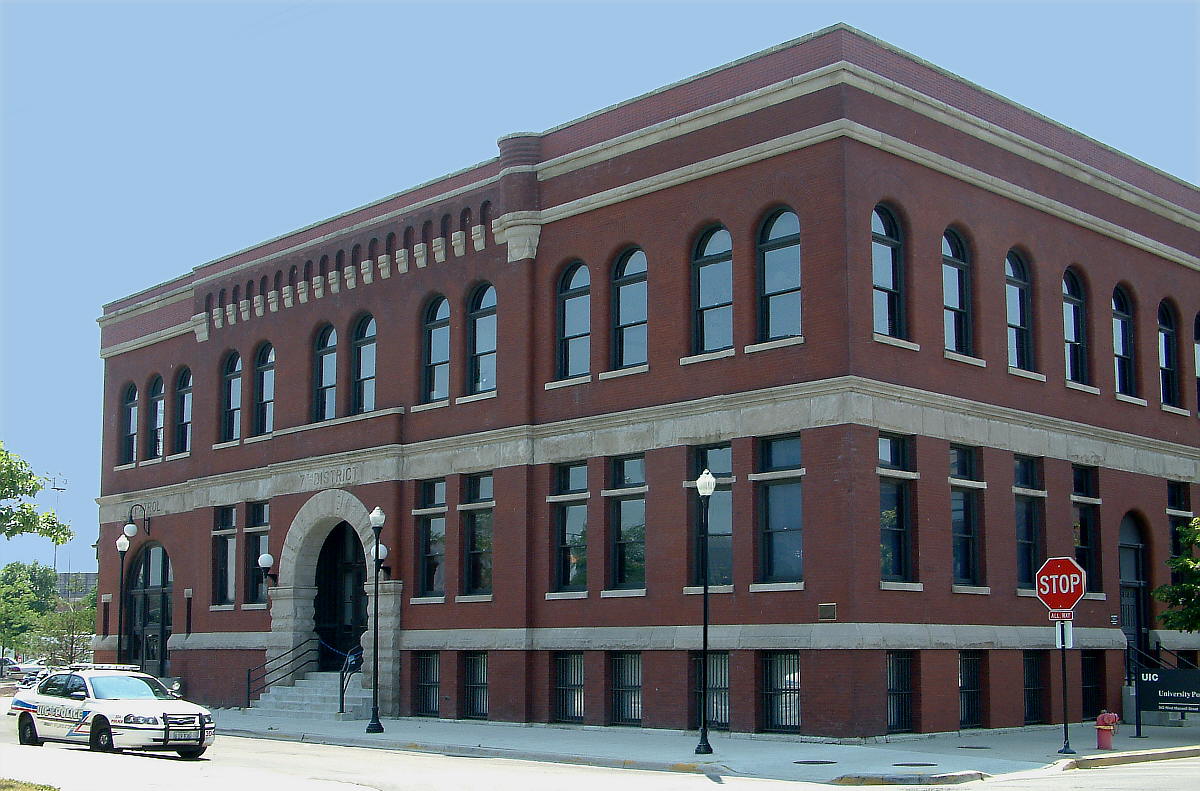 The Precinct House in 2005 lovingly restored, but still proudly showing its 'battle scars'.

It is located at the junction of Maxwell Street and Morgan Street in Chicago. The building, the opening shots filmed near it, and the markings of the police cars, all suggested the series was set in Chicago. The producers however always maintained it was not meant to be anywhere other than a big city, where you had good, bad and indifferent weather. It was intimated that it was probably in the East and that it had large areas of urban decay. The name itself was taken from a tough area in Pittsburgh called 'The Hill', close to where Bochco had gone to college. During the course of the series a total of some seventeen precincts were used they were Castle Heights, Farmingdale, Fillmore, Jefferson Heights, Michigan Avenue, Midtown , North-East, Polk Avenue, Preston Heights, Richmond Avenue, South Ferry, Southfields, South Park, St. James' Park, Von Steuben Avenue, Washington Heights, West Delavan and of course Hill Street.

Note in the above screen shoot taken from the series, the Morgan sign has been moved around and now points East down Maxwell. It has been replaced with a fictitious Hill Street sign, which is in fact pointing South (as can be guessed by the strong shadow). As well as those famous views of the building, much of the opening or 'establishing' shots (especially those trademark aerial shots of moving railway stock), were filmed in and around Chicago. However, most of the studio and outdoor acting scenes, were filmed in Los Angeles California.

Sadly research by the webmaster has been unable to locate any of the props used by the various studios where filming took place over the years, some of which no longer exist themselves. A few outside locations have been identified in LA, but again most no longer exist either. 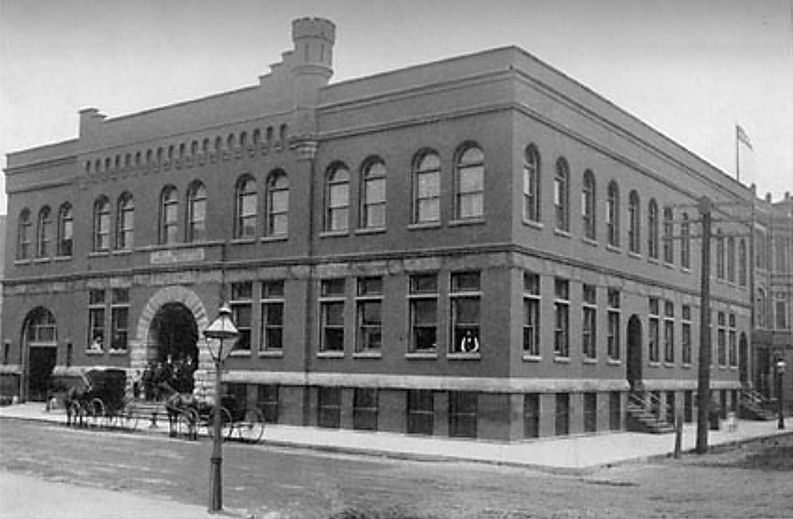 A brief history of the Building:
The Maxwell Street Precinct Station House has stood on this spot since at least 1889. For many years it was one of Chicago busiest police stations and had an illustrious career until its closure in December 1997. At that time, the building housed the Vice Control Section and the Organised Crime division. By the turn of the century (1900) the area around the station had become one of the most heavily populated, and dangerous precinct in Chicago. It is said there were some 125,000 people in just two square miles, speaking a large number of different languages. The above picture show the Precinct House, as it was around that time.

The immediate area soon attracted the name 'Bloody Maxwell' due the number of homicides and the activates of 'organised crime', preying on the many resident immigrants. During the twenties the area became the centre, for the production and distribution of bootleg alcohol, for the infamous 'Genna' family. It has been sugested elsewhere that it is possible that something like half of Maxwell's police officers were on the bootleggers payroll 1920, receiving around $15 a week. Lieutenants and captains from neighbouring districts receiving at least $500 a week. Whatever the facts, there clearlly was a larga amount of coruption taking place. Eventually the bootleg operation failed, due in the main to most of the Genna family being murdered by other gangsters.

After the repeal of prohibition in 1933, the area became a little more 'law abiding', but by the fifties people had already begun to leave this declining neighbourhood. In the early sixties large areas were cleared, to make way for the University of Illinois campus. In 1961 the police services was reduced from 38 to 21 districts. The station survived these cuts, to become one of just a few 19th Century precinct houses, to still be active into the late twentieth century.

Much has been written about the area and many local people are bitter that so much of it has now been lost. Often referred to as the place that the Chicago Blues was born (and from that Rock and Roll it is suggested), there can be little doubt that the area around Maxwell Street was very special. Much debate and many ideas later, it has mostly been destroyed and lost for ever. However at least Maxwell Street Precinct Station House will live on and is now the home of a new type of police officer - The officers of the University of Illinois Campus Police. 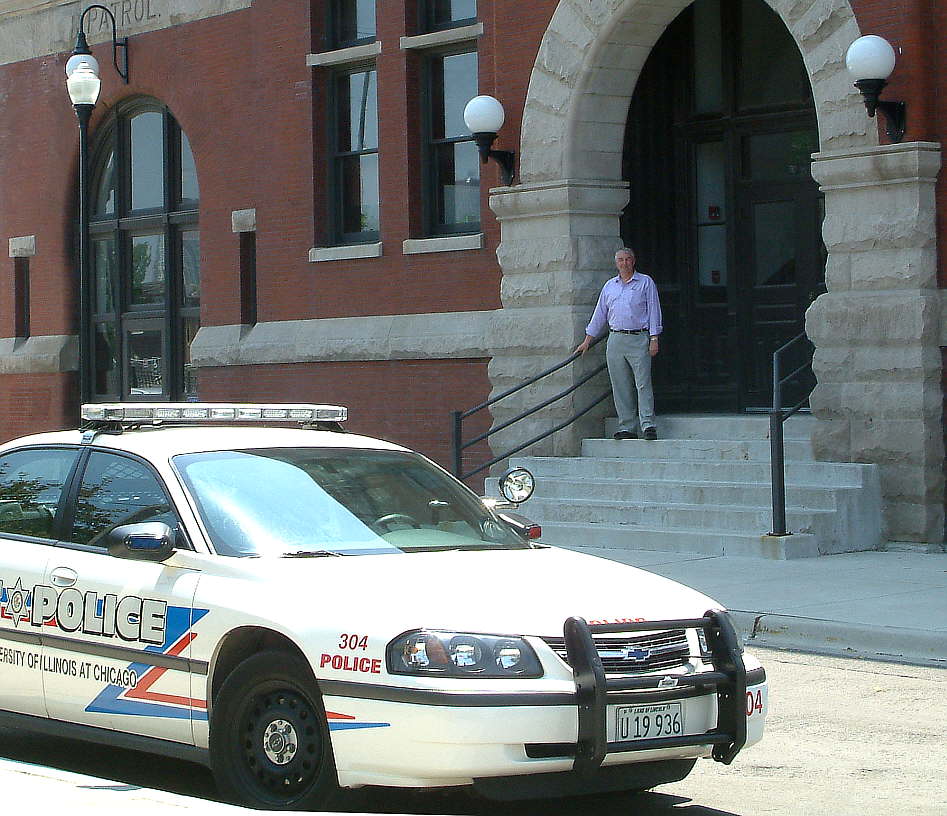 The webmaster proudly standing on the very steps Frank walked down every night (while a scruffy little man in the back of the patrol car asks "what are you doing up there Dog Breath?"

Here is how google maps shows the location. If you wish to visit and photograph it yourself, please first ask them at the door first, or you could get yourself arrested.